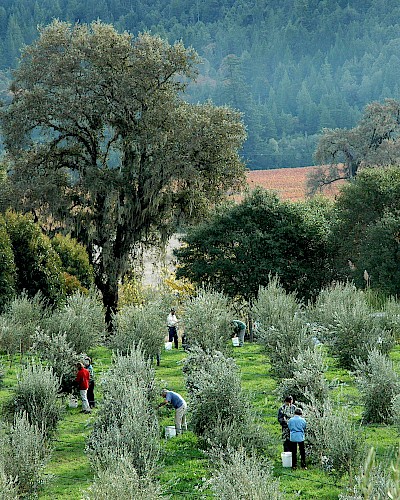 The name Stella Cadente sounds romantic, even if one doesn’t know that it means “shooting star” in Italian. Away from city lights in the Anderson Valley of Mendocino County the nights are very dark, and the summer months bring a spectacular display of shooting stars. This was the inspiration for the names Shooting Star Ranch and Stella Cadente Olive Oil.  Some compare this part of Northern California to Tuscany, and the extravagant vistas range from redwood forests to golden hillsides dotted with oak.  The morning fog slides into the valley from the Pacific, taking the edge off the summer heat and providing an almost perfect climate for growing grapes and olives.

Founded in 1999, when the first three acres of olives were planted at the ranch, Stella Cadente went on to produce our first extra virgin oil in 2000 and won recognition from the International Olive Oil Council in Perugia, Italy, for being “…equal to or better than the best of the Italian oils.”  From these proud roots, Stella Cadente has slowly grown to become the premier source for oils produced from Mendocino County’s unmatched Tuscan-style olives.  Today, many of the olives used are sourced from small family farms and vineyards in the hills and valleys of the county, produced sustainably and independently, as are many of the regions well-known wines.  Once sold only at local farmers’ markets, Stella Cadente is now found at select retailers across the country.

Stella Cadente also produces a wonderfully fragrant Meyer Lemon Oil, Blood Orange Oil, Persian Lime Oil, Basil Oil and Rosemary Oil, pressed from heritage Mission olive trees located in the western Sierra foothills.  Our Butte View Ranch is also the home of our heritage Mission Everyday Extra Virgin olive oil. The trees are farmed by 4th generation rancher and partner Lewis Johnson, and are an historic legacy of Junipero Serra and the California missions.  The hot, dry summers and long ripening time produce an unctuous and buttery oil, the perfect foil for the tart citrus and fresh herbs used to flavor it.  The flavored crush oils are made by milling the olives and the fruit or herb together in Stella Cadente’s own press, within hours after the mid-winter harvest.

The olives from Shooting Star Ranch, and the surrounding Mendocino County family farms and vineyards are raised without pesticides and herbicides, hand-picked to avoid bruising the delicate fruit, and rushed to the press within hours of picking.   Using a combination of traditional stone-wheel crushing and modern milling technologies, the resulting oils showcase a range of aromas and flavors, described by Slow Food Italia as: “(The aroma is) very fresh, with an expansive and complex nose, the predominant flavor of new olives (is) accompanied by notes of mown hay, tomato leaves and aromatic herbs. The taste corresponds with the smell; (the oil is) very lively, with a good texture and pleasingly bitter and spicy notes.”  Much more robust than those found in commodity extra virgin oils, these flavors echo both their California terroir and their ancestry in the rugged hills of Tuscany.

Stella Cadente’s oils have won international acclaim, with the only repeat wins at the Oils of the World competition at the Los Angeles County Fair in 2003 and 2006, of Best of Class and Best of Show; a first for a domestic producer.  The winner, the L’Autunno Blend Extra Virgin Olive Oil, is the flagship of the line, and won Gold again in 2007.  Named “Best California Extra Virgin Olive Oil” in 2002 by Slow Food Italia, and “One of the Top 10 Oils of the World,” by Der Feinschmecker, in 2006, the L'Autunno gained recognition in Europe as well.  The flavored crush oils also garnered Gold in Los Angeles in 2005, 2006 and 2007, and continue to dominate local competitions.  Stella Cadente’s Basil Oil received top honors at the 2008 NASFT Fancy Food Show in New York, coming home with a sofi ™ Gold for Outstanding Oil, and besting a field of first-class international competitors.  Our Rosemary Oil received the coveted Double Gold-Best in Show at the Los Angeles County Fair in 2010.

A favorite of local Wine Country and San Francisco Bay are chefs alike, Stella Cadente is often the centerpiece of special dinners, wine tastings and cooking demonstrations.  Visit www.stellacadente.com for more details about these events and others.  Don’t forget to check for our favorite recipes as well, contributed by chefs, staff, and customers.

“I'm a devoted fan! ...Stella Cadente’s winning the Best of Show at the Oils of the World Competition is equivalent to winning Best Picture at the Academy Awards."
-- John Ash, Chef, Author, Culinary Director for Fetzer and Bonterra Vineyards

“Stella Cadente's Blood Orange Oil is not an infused oil, but a carefully balanced oil with absolutely no bitterness. It is the only oil I use in my orange and ginger cake (“Olive Oil from Tree to Table”). Try it on a beets, Roquefort, and arugula salad or drizzle it over grilled fish or roast pork.” -- Peggy Knickerbocker, Cookbook Author

Stella Cadente also helped pioneer the concept of the Olive Oil Bar in the United States, opening the first in an Anderson Valley cooperative tasting room in 2002.  The bars feature large stainless steel “fusti” containers, imported from Italy, and provide customers with the opportunity not only to taste the oils, but to buy as little or as much as they need.  As in Europe, customers can fill their own containers, or take advantage of a variety of decorative bottles and mason jars available for sale.  The concept is environmentally sustainable, reducing packaging and waste.  Several of the bars feature olive-related gift items and olive oil accessories formerly found only in Italy and Spain.  The emergence of olive cultivation as a feature of Wine Country lifestyles has added cachet to this once humble European tradition of bulk farm-stand sales, and Stella Cadente has opened tasting bars as far away as Wisconsin and Virginia.  Local northern California bars include Boont Berry Farm and Philo Ridge Tasting Room in Boonville, Westside Renaissance Market in Ukiah and Harvest Market in Fort Bragg.

View more in the Rhododendrons gallery...