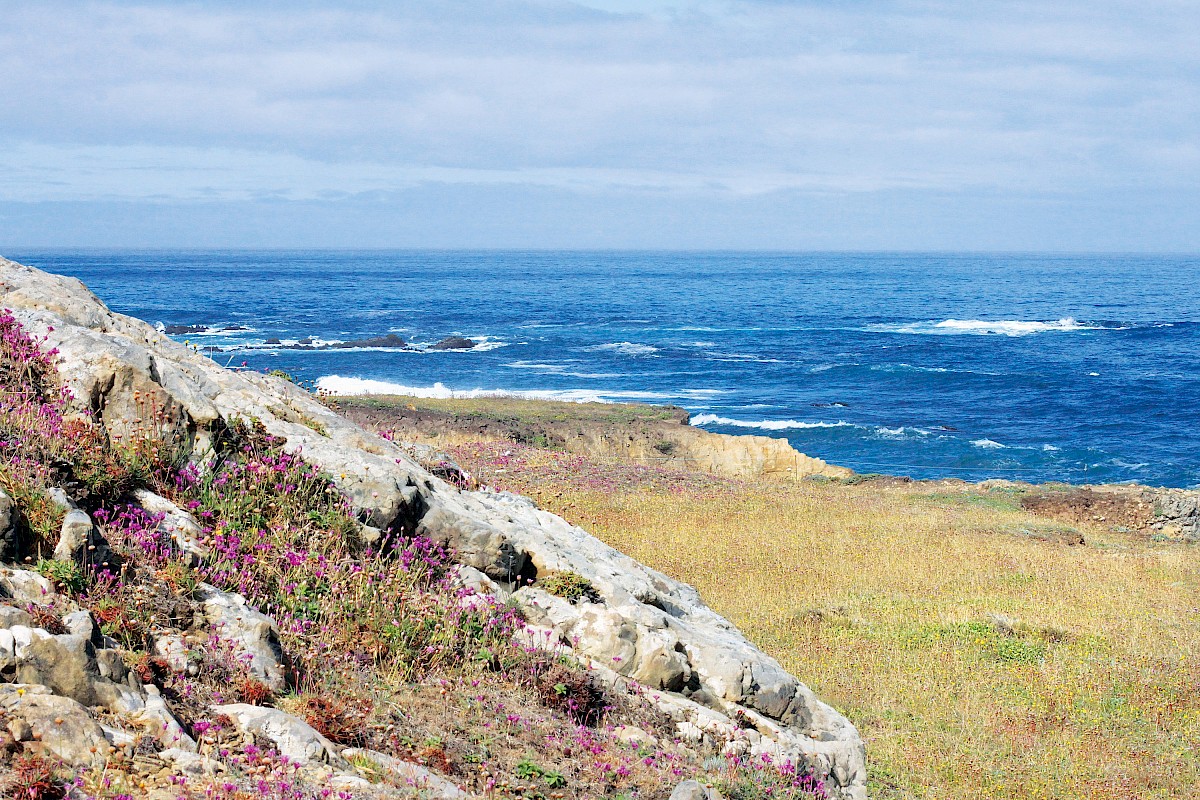 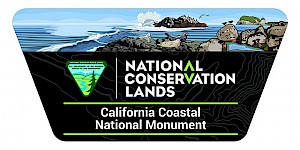 DID YOU KNOW? The California Coastal National Monument (CCNM) is located along the entire coastline of California. It is among the most viewed but the least recognized of any of the Nation's national monuments. The Monument consists of a network of more than 20,000 small islands, rocks, exposed reefs, and pinnacles that provide a haven for animals and plants along the 1,100 miles of the California coast. Mendocino Coast Botanical Gardens has a great view of the Monument from our headlands!

Natural Wonders The nutrient-rich waters surrounding the monument support a diverse array of habitats and organisms. Wave action and ocean currents have a strong influence on the distribution of these habitats and on biological diversity. The monument includes a significant amount of the rocky coast ecosystem and portions of the intertidal zone; the "border between the land and sea." It is one of the harshest natural environments on Earth. It is here that the pounding of the surf and the changing of the tides create tide pools, which support creatures uniquely adapted for survival under such extreme conditions.

A Bird Haven Monument rocks are critical resting and breeding grounds for thousands of birds. Although the ocean is their primary habitat and food source, seabirds such as murres, guillemots, and puffins are dependent on the offshore rocks for nesting, where they are safe from terrestrial predators such as foxes and raccoons. At times, vast flocks of murres, pelicans, cormorants, and gulls wheel about the rocks. Hundreds of the smaller seabirds, such as petrels and auklets, come and go under the protection of darkness, mostly unseen but still a vital part of the seabird colony. From the Gardens' headlands several species of shorebirds, such as the black oystercatcher, black turnstones, and surfbirds can be heard piping above the crashing waves. Cormorants, pelicans, and gulls are also commonly seen.

Marine Mammal Retreat Several marine mammal species depend on the islands, rocks, reefs, and pinnacles of the monument, as well as the ocean around them, for forage and breeding grounds. Along the Gardens' coastline harbor seals, which are members of the earless pinniped family, and California sea lions, which are members of the eared pinniped family, can often be seen in the surf. Elsewhere in the monument a few small colonies of Steller's sea lions, a threatened species, can also be found. Elephant seals can be seen in specific locations along the coastline and in the waters around the monument. The northern fur seal, a member of the sea lion family, is sometimes found around some of the monument's outermost rocks. The California sea otter, another threatened species, is commonly seen along the central coast, and on rare occasions, has been observed on coastal rocks.

Created by Presidential Proclamation Under the responsibility of the United States Department of the Interior's Bureau of Land Management (BLM), the CCNM is part of the National Landscape Conservation System. Established on January 11, 2000, by Presidential Proclamation under the authority of section 2 of the Antiquities Act of 1906, the CCNM was created to elevate the protection of "all unappropriated or unreserved lands and interest in lands owned or controlled by the United States in the form of islands, rocks, exposed reefs, and pinnacles above mean high tide within 12 nautical miles of the shoreline of the State of California." The Presidential Proclamation recognizes the need to protect the CCNM's overwhelming scenic quality and natural beauty, and it specifically directs the protection of the geologic formations and the habitat that these rocks and small islands (i.e., the portion above mean high tide) provide for seabirds, sea mammals, and other plant and animal life (both terrestrial and marine) on the CCNM. In addition, the proclamation recognizes the CCNM as containing "irreplaceable scientific values vital to protecting the fragile ecosystems of the California coastline." CCNM is home for thousands of seals and sea lions, a haven for hundreds of thousands of seabirds, a habitat for millions of upper rocky intertidal species, and a spectacular interplay of land and sea.

Partners for Protection The mission of the CCNM is to protect and foster an appreciation for and a stewardship of California's coastal resources associated with the CCNM, while the stated goals for the CCNM include using the CCNM to help enhance cooperative and collaborative initiatives and partnerships through cooperation, collaboration, and partnerships with a variety of communities, agencies, organizations, academic institutions, the public, and other stakeholders. As California's population grows and more people live and recreate along the coast, the potential for impacting these fragile ecosystems is greater than ever. The BLM is teaming up with coastal communities, the California Department of Fish and Game, California State Parks, and many others to protect and study the rock and island ecosystems. There are a number of ways you can help protect the monument as well:

Click here for more information on the California Coastal National Monument from the Bureau of Land Management.

Visit one of six onshore units of the CCNM on the Mendocino coast: Point Arena-Stornetta

« Previous: "Plants" in our Marine Zone