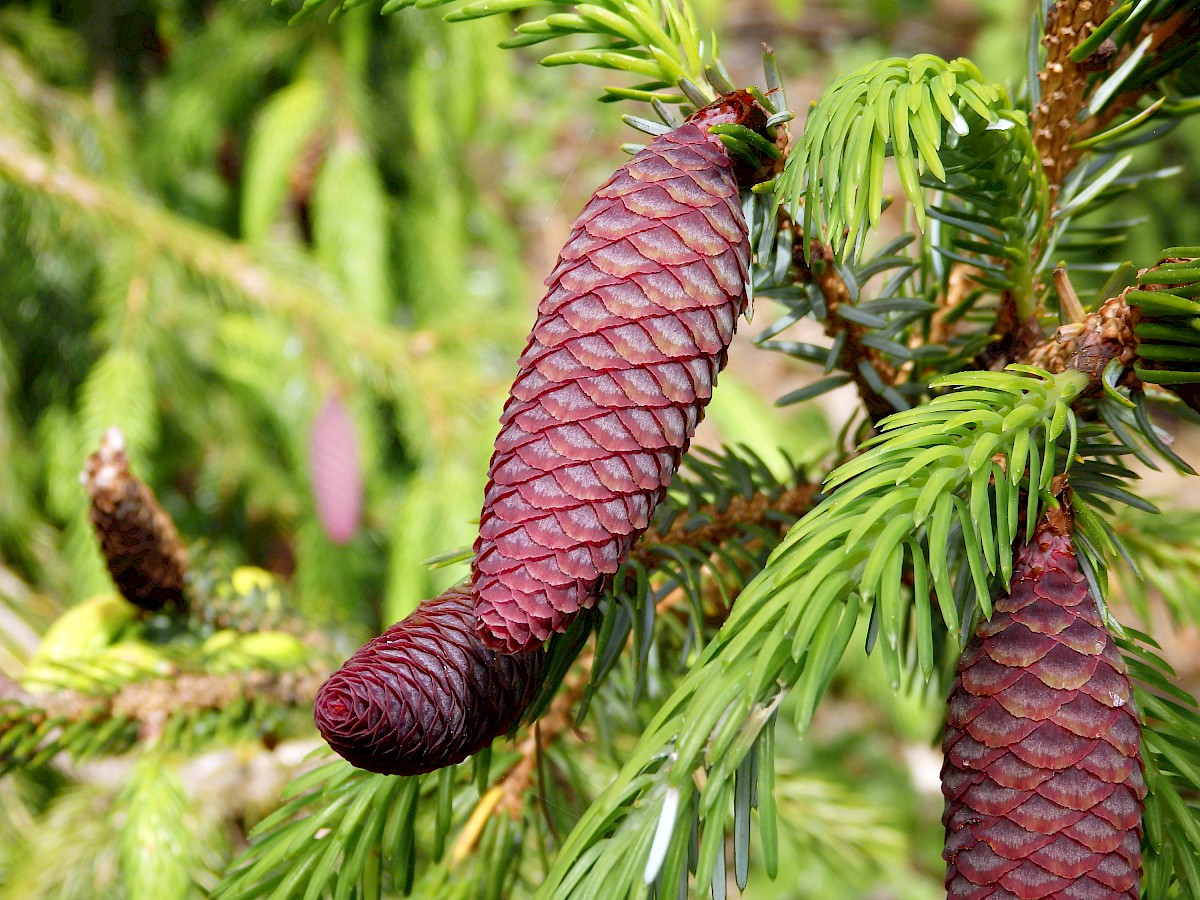 Growing and caring for Conifers

Planting
Spring and early fall, when temperatures are cooler and rainfall more abundant, are the best times to plant conifers. To reduce transpiration or water loss from the tree, plant on an overcast day when there is ample soil moisture. Most conifers grow best in full sun, but a bit of afternoon shade is best for the dwarf conifers in hot southern zones.

Soil
For most conifers, slightly acid soil that is loamy and well-drained is ideal. Unless the soil is very compacted or so light and porous that it retains very little moisture, you will not need to add organic matter. If soil drainage is a continual problem, consider creating a raised planting bed that has been amended to improve the soil.

Water
Diligent care is critical from the time of planting until new roots are established. For the first few weeks, check the plant every two to three days for signs of stress and water whenever the soil feels dry. Once the roots have grown out into the surrounding soil, which generally takes about three to six months, the plant can be checked less frequently. Established plantings need supplemental water only during periods of prolonged drought. The amount of water will depend on the species and your soil type. On average, water thoroughly if the top two to three inches of soil feel dry. Deep waterings when needed are better than frequent, shallow waterings. It's important to note that conifers do not show signs of stress as readily as other plants. For example, they seldom wilt; instead, the overall plant color will lighten or fade and interior needles will turn brown.

Fertilizing
Conifers are not heavy feeders and need only an annual application of a general, complete garden fertilizer such as 10-10-10 or 16-8-8, or a top dressing of well-rotted manure. It is best to fertilize in the early spring before the plants break dormancy, or in late fall before the soil freezes.

Pests and Diseases
Bark beetles are the most devastating insects to attack pines. They exist throughout North America in both eastern and western forms. They will kill healthy trees and trees already weakened by other factors. The bark beetles girdle trees while building egg-laying galleries. The lack of sap flow immediately kills the tree, the insects move to adjacent live trees and the damage spreads. The Douglas-fir tussock moth is an important defoliator of true firs and Douglas-fir in Western North America. The larvae feeds on current year's foliage, causing it to shrivel, turn brown and will kill or top-kill the tree. The pest is considered serious and can kill up to one-third of trees in a stand of Douglas-fir and deform significant numbers of trees remaining alive.

Pitch canker is a recently introduced fungal disease of pines. Monterey and Bishop pines are especially susceptible, although other non-native California pines can become infected. If allowed to progress, pitch canker will kill the tree. The disease was first reported in California in 1986 in the Santa Cruz and southern Alameda county areas. Potential vectors include all twig, cone, and bark beetles associated with Monterey pine. Disease spread can occur through transport of infected trees and tree parts, bark beetle insect vectors, and the use of contaminated tools. Seeds from infected trees can give rise to infected seedlings. Infected seedlings may initially appear disease free, but later develop disease symptoms.

The first symptom usually noticed is color change in the foliage at the ends of branches--these are called “flags.” Flagging can be caused by the disease, feeding activity of twig beetles, or a combination of both. Needles on infected branch tips fade from the normal dark green to lime green, to yellow, and finally to sorrel before needle drop. Needle color change can occur any time of the year. If pitch canker is the cause of the fading, closer inspection of these branch ends will reveal pitch flow at the transition zone between dying and green needles. These characteristics may be hard to see if fading branches are high in the tree. The infected wood under the bark is resin-soaked and amber in color.

The name “pitch canker” is appropriate because infections are characterized by a copious pitchy flow. Cankers may be found on any woody part of the tree including cones, branches, the tree trunk, and exposed, damaged roots. Pitch from large branch or bole infections may run down the trunk for many feet or drip onto the ground. Dried pitch of old infections will be thickened and amber colored. Pitch nodules of the sequoia pitch moth can resemble pitch canker infection. These nodules are usually rounded, but can run down the host for a foot or so. Most have remnants of the insect’s pupal case extending out. Pitch tubes of the red turpentine beetle occur at the base of the trunk. This bark beetle is not believed to participate in disease spread, although attacks can weaken an already stressed Monterey pine.

Pruning and Maintenance
Dead or diseased conifer branches should be removed immediately, regardless of the time of year. Any other pruning should be done when the plant is dormant. Unlike many deciduous shrubs, most conifers can't re-sprout from older wood, and so a good rule of thumb is never to remove more than one-third of the total growth at a time. If you prune too drastically, the plant may never fully recover. Many of the dwarf varieties never need to be pruned, but do appreciate some thinning to allow air and sunlight to penetrate to the interior of the plant.

The most common method of pruning evergreens is known as "cutting" or "heading" back. Only part of the branch is pruned; the terminal or tip growth is trimmed to side or lateral buds or branches. This promotes thicker, more compact foliage and a smaller overall plant. Pines are pruned in a special way, called candling, to control growth. Candles are the elongated shoots from which the current season's needles will emerge. To prune a pine, remove one-half to two-thirds of the candle growth in the spring. Gently break the tips off by hand when the needles are just pushing out of the shoot. Do not use pruners as the blades will also cut the tips of the remaining needles, causing them to brown and discolor.

A type of mutation called a reversion is common in dwarf or variegated selections. A reversion is when these cultivars change back to the plant's "species form." Cultivars of some species, such as sawara false cypress, are especially prone to reversion. Familiarity with your particular cultivar will enable you to spot—and remove—a renegade branch quickly. To be sure that you have removed the area where the mutation originated, make the cut in the stable growth just below the point where the reversion has occurred.

Mulching conifers is essential. It maintains the relatively cool soil temperatures that most conifers prefer. Mulching also helps conserve water and reduces weed competition. However, the mulch should be no more than two to three inches deep, and should never come in contact with the trunks of your plants.

ADDITIONAL INFORMATION
For more information on conifers, see the website for the American Conifer Society at www.conifersociety.org or The Gymnosperm Database at www.conifers.org.
Learn more about the Conifer Collection at the Mendocino Coast Botanical Gardens.

Next: Introduction to Heath and Heathers »